This is day eleven of The Artfully Wild Blog Along. You can find out more here.

I. Speaking of grackles, I was out with Crow last night, and I caught sight of a tree full of them while we were on our way into the restaurant. Of course, as soon as I took out my camera, a bunch of them flew off, but this one bad ass rusty door hinge stuck around in this perfectly crooked tree. 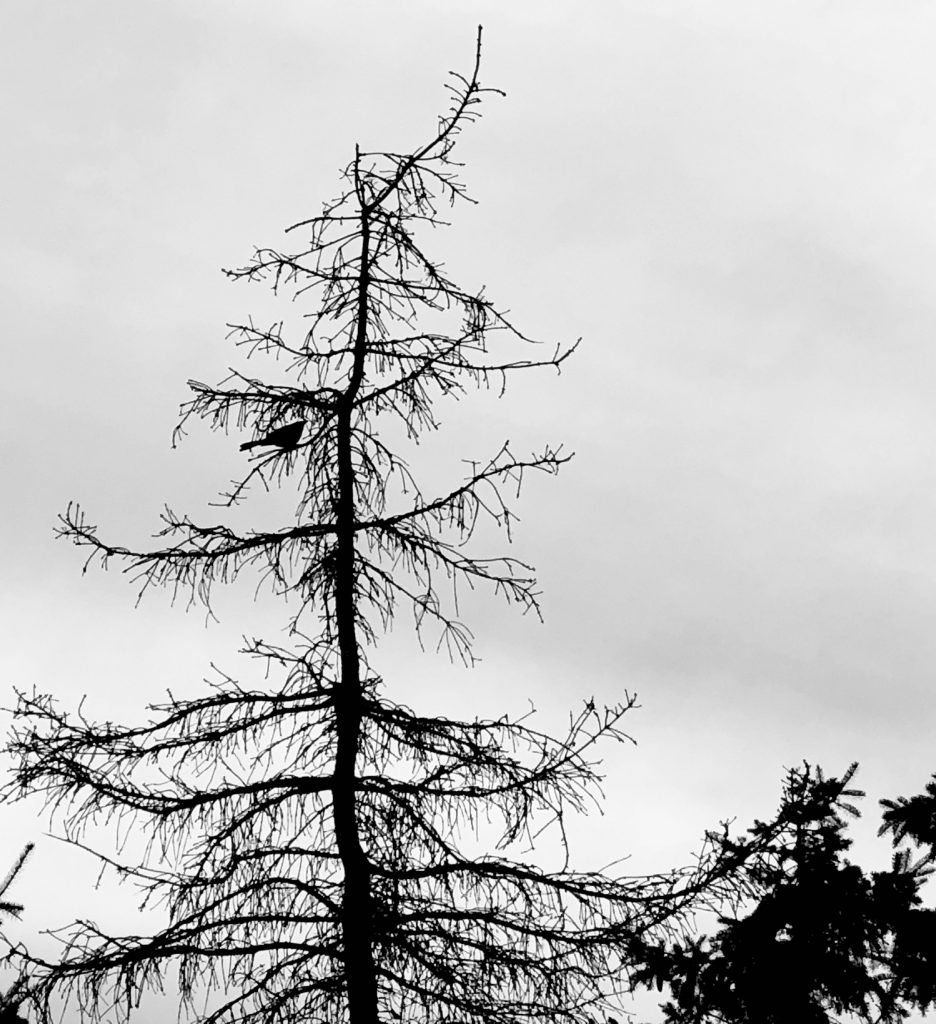 II. I had a hard wobble last night just before sleep, wondering about things I really shouldn’t really be wondering about, and I *caught myself in the act*. Gently nudged myself back in the direction of ‘Oh hey, all is well. You are loved. All is as it should be.” And drifted peacefully to sleep. This is huge, so I wanted to note it.

III. I am a day behind in my poetry course, but I spent some time getting caught up yesterday to the tune of three poems, which reminded me of the old days, when all I did with my free time was poem. My brain was completely fried once I was done churning them out, but it was so good to just dig in and make something out of nothing but the thoughts in my head and the feelings in my heart.

I’ve been enjoying making poems so much that I enrolled for Sage’s next offering, which seems right up my alley. Ritual and poems? Yes please.

IV. This is my favourite of the three poems I wrote yesterday:

It only happens
at new moon,
but I’ve seen you

pull up your roots
like stockings, lash them,
your withes like garters,
toss your hair,
and dance with the wind.

On calm days,
you stand sedately,
holding the tire swing while I fly,

and sometimes
in height of summer,
your shoulders sag,
and your hair tumbles
full of jewel-toned bottle blue beetles,
head on fire with chattering birds.

You wept with me once
when I told you my secret,
covered my head
against the rain,
rocked me gently
while the wind blew,

V. I wrote this about poetry for my Facebook peeps because I didn’t want them freaking out if I wrote something heartbreaking (which I tend to do). I thought I’d put it here, too.

A note on poems: Most of my poetry is confessional, by which I mean that I craft many of them out of experiences I’ve had, but that doesn’t mean they are all ‘true stories’.

Most people read poems as though the speaker in the poem is the poet herself, and that’s totally fine and makes perfect sense, but often the speaker in a poem is *not* actually the poet.

In one of the poems I wrote today, for example, the speaker in the poem (who you may have assumed was me, but was not) was someone watching someone have an experience very like an experience I myself, have had. So, not a ‘true story’, necessarily, but still a true poem. This is what poets do. We mine the moment for its treasure, and then we run with it. Strangers become lovers. Trees become mothers. Jesus becomes a sailor, and whatever else, we hope you find something you recognize in what we write.

In the end, though, it doesn’t matter if you think the poem is a confession or not. The speaker in the poem (whoever is telling the story) is put there in whatever circumstance they are in in order to make you feel things, wonder about things, or understand things.

If a poem makes you do any of that, the poet has done her job.

VI. Here’s the poem I’m referring to wherein the ‘speaker’ is *not me*, but rather witnessing me in a moment from my past. It’s a bit tidied up since yesterday’s frantic scribbling.

Overhead In A Restaurant

She sat, her hand palm up,
fingers curled like a question,
in case, for once,
by some miracle,
he might
want to hold her hand.

I recognized the way
she wore her shoulders
around her ears,
the way
she kept eyes down,
her other hand
in her lap
clenched into
a quiet fist.

She didn’t see him recoil,
but I did,
watched as his face
as it turned to stone,
the way he drew
his hands in,
tucked them up
under arm pits,
so that his whole body
was a hand held up,
the word NO
in block letters
etched in the
centre of the palm.

I held my breath as, in time,
she raised her face to his silence,
and drew her own hand in.

She unclenched her quiet fist,
and reached for her wine.

VII. Therapy was cancelled today due to illness, so I used the time I would normally spend gearing up for it to get everything that was due out to my A Year Of Rumi students up and ready for them to enjoy. And it’s only 10 a.m., which means I have an entire extended weekend full of hours to enjoy exactly as I like. Unfortunately, my love is not around this weekend, so maybe ‘exactly’ is a strong word, but close enough. I’m going to feed my kid a Portuguese thing with meatballs, roasted peppers, and homemade chimmichurri sauce. We’ll probably play some dice. I’m going to paint A LOT and poem A LOT and maybe do some things around the house – like unpack the vacuum I bought that’s been sitting there in its box since last week some time. Heh.

VIII. I’m also going to dig into this book by Tyler Knott Gregson, which has me swooning. I’ve also got these two of his books waiting as well. IX. The thing with poeming is that living + reading poems = poems. If you want to poem, live as fully as you can, and read poems. Lots of them. They will come into you if you let them, and baby poems will pop out when you least expect it. Yes, I meant that to sound sexy. Poeming *is* sexy, as is anything creative.

X. And, finally, this poem for Mary Oliver, which is still a work in progress, but it’s getting there.

Who will sit beneath the alder now,
exchanging poems for air?

Who will watch
the dappled trout
jump and snap
at winged jewels?

Who will tromp
in summer’s gloaming,
and then at day’s end
come in trailing flowers

to tell me what is real,
and what’s less so,

and
how to save my
own damned life?

You were the net
that kept me from drifting
too far into the mist
of the unobserved life,
taught me how to see,
and how to love it all, wildly.

You made enchantment
out of the ordinary
berry,
bird,
bear,

and helped me do the same
out of coffee cups,
cigarettes, dust motes,
and rumpled sheets,

my precious life made more so
because you named it.

And that’s me for today, my loves. I’ll see you tomorrow with more of the same.