I. I watched the documentary series entitled “Q: Into The Storm” over the course of last week and WHOA. Fascinating. Everyone should watch it if they want to understand how the fuck QAnon happened, who is behind it, and how *creepy* it really is.

II. Mentioning it on Facebook led to the discovery of Qanon Anonymous – a fantastic podcast that is both hilarious and informative. I found it on Spotify and almost immediately signed up with them on Patreon. This is good stuff.

III. I spent yesterday in a relaxed state, slept well, and woke up this morning feeling refreshed. Got my newsletter sent out + the Darling Human note + read a bunch of blogs with my morning coffee. Now I’ve tossed a corned beef brisket into a pot to simmer all day so I can have it for dinner tonight. My studio is clean. My kitchen is clean. This feels really good.

This train of thought was prompted by seeing this meme floating around Facebook: VI. I have some tender things on my mind about friendship and lineage and giving credit and the way I’ve seen some people mine other people’s content to pad their own. Renee and I talk about this fairly often because we’re both in a position where people get close to our work because they love what we do and then we find what we do cropping up in their stuff without any kind of acknowledgment of where it came from. It is disheartening, mostly because I don’t think people realize that they’re even doing it. There’s no way to address it without seeming like a fucking asshole, either.

Thankfully, there are those who integrate what we’ve offered and then make their own thing – things that are obviously their own – and even though those things are obviously their own, we find ourselves mentioned in the ‘credits’ in some way. That is beautiful, and that is where I prefer to spend my energy and attention. I have art teacher babies who started out in my classes and have now way surpassed me in terms of numbers, and I am *incredibly proud of them*. Without fail, you will hear them say things like “I got started on this journey with Effy Wild” or “Effy was a huge inspiration to me when I first started out.” or  “Effy was one of my first teachers” or “Effy is the OG Art WItch”.

This kind of acknowledgment makes me feel appreciated.

VII. I had a relationship very early on in my tenure as a teacher that totally fell apart once I realized that she wanted the benefit of my network more than she wanted my friendship. There was this weird period of time where I was paying her half of everything I earned through my network as part of our agreement, but she wasn’t signing in. She was totally absent. She had a million excuses about why, but it boiled down to this:

I was giving her half my income for nothing.

I girded my loins over time and pointed this out – that I couldn’t keep paying her if she wasn’t going to show up, that I got that she was going through a hard time, but I couldn’t subsidize that, butandalso that the friendship was way more important to me than the business partnership, and I wanted to find a way to work it out. She muttered that it was the opposite for her. She needed the money. The business mattered more.

I was deeply hurt by this. Deeply. But I was not in a place at the time where I could respond in a healthy way – and yo, healthy would have been to say “Well, fuck off then because I am not a charity and I’m not here to pay you to do nothing just because we’re “friends”.”

I was sure I’d somehow brought this on myself. I didn’t like myself enough to stick up for myself. I guzzled a bottle of wine, cried a lot, and then, within a matter of a few months, while continuing to pay her for doing nothing, I started my own thing without her. When I started the new thing without her, and it became obvious that this thing was going to outpace the other thing financially, she blocked me on the socials and talked shit about me to anyone who would listen, even going so far as to “report me” to people I collaborate with.

It was hard not to take this personally, but in time, I started getting emails from people saying “Oh, hey! She did this same thing to <insert name here>.” Something about knowing that helped me move on from it, but it left a wariness in me that I haven’t shaken to this day.

Do they want *me* in their lives or do they want what they can get out of being associated with me? Or some combination of both?

Tender, tender subject. No resolution at the moment. Just some honest grappling served up for your entertainment.

IX. Video chat with my Bean scheduled for this afternoon. I miss his little face so much and I can’t wait to see him and hear him bellow AWESOME MIMI! AWESOME! 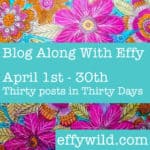 I’m planning to blog every day this month along with a crew of almost 300 other bloggers in my “Artfully Wild Blog Along“. If you’d like to join us, you are most welcome! Both bloggers and readers are invited to join in the fun! The only requirement is that you agree to comment on three blog posts for every blog post you share in our Facebook