What If I Sh*t On The Table?

I. I wrote most of what I want to kick this week off in my newsletter, which you can find here, but there’s some less “newsy” stuff I want to explore, so I’m here today as well because a witch has things to purge and what is a blog but a personal vomitorium?

I kid, but not really. Anyway, let me explain that rather – um – alarming title. I promise it ends well.

II. I was in conversation last night with some shadow-dancers, and in response to something we were exploring (how difficult it is to stand for what we know is true for fear of abandonment), I had a vision. It ain’t pretty, so brace yourself.

I saw all of us trauma survivours (of whatever – you know who you are) as women on the birthing table, in transition. I saw us exhausted, in pain, at the end of our collective ropes. I saw us fully dilated, with our bodies absolutely on fire with the need to push, and I saw us clenching up for fear wondering what would happen if we shit on the table. This thought, this fear of laying a fresh turd right there for all present to see is so powerful that we *do not dare to push*. So we white-knuckle it. We hold it all in however painful it is to do so.

Gross, I know, but stay with me.

III. Along with this vision came this understanding:

If we don’t push, we’ll delay the inevitable, and it will hurt for a lot longer, and while shit is not a pleasant thing to have to deal with, the baby that *needs us to push* in order to come into the light doesn’t care one iota about the fact that we are going to shit on the table, and neither should anyone else who is present in the room, and if those who are present in the room *do* care about the fact that some shit arrived along with a *whole ass human being* we just pushed out of our cootchie, well, those humans do *not belong in the room*.

IV. It was one hell of a vision, and while this whole “If you can’t handle me at my worst, you don’t deserve me at my best” thing is not a new revelation for me, it was powerful to have this new (if rather visceral) way to think about it.

V. I was reminded of the experience of having all of my upper teeth extracted.

After growing and feeding babies in and from my body while I was living in poverty, my teeth were too far gone to save, so they had to come out. And I was terrified because like many of us who have a history of child sexual abuse, I do not enjoy the sense of powerlessness that comes over me when someone hovers (looms!) over my prostrate body and does stuff to me that hurts.

I had asked my partner to stay with me throughout the process, which my partner promised to do with the dentist’s approval, but he couldn’t handle it. He said “Your face is getting all wrinkly and it’s freaking me out.” and he *left me there*. I was high on nitrous oxide, terrified, and totally helpless, and *he left me there*.

Same thing happened when I went to emergency with an irregular heartbeat and the doc was afraid I was going to throw a clot.

He left me there, all hooked up to a heart monitor, watching it like a hawk while I waiting for a head CT, afraid I was going to stroke out.

When my first husband died of pneumonia and my grief over it elicited eye-rolls and exasperated sighs. When the kids in our household were all going through some form of crisis AT THE SAME TIME and he checked out completely, smoked pot and played WoW and left us all to our own devices. When my kid got hospitalized for psychosis and I was left to fend for us both while he holidayed in India.

VII. I know better now, because, me? If I love you?

I want to be in the room.

Hell, I want all of that even if I barely *like* you.

So, yanno. It follows that anyone that wants to be in my life has to be able to say the same or they don’t deserve me.

And that’s a thing I know now.

On To Lighter Fare

VIII. When I say “lighter”, I mean “less heavy”. I am lighter. The content I am pursuing and engaging is lighter. The things I’m painting are lighter. The way I play is lighter. While all of *waves at the above* is super heavy, I am following heavier fare with lighter fare as way to practice self-loyalty. I am doing therapy and then engaging in something whimsical so my nervous system has a chance to regulate itself. I’m taking a course on shadow work, and following up with an episode of The Great Pottery Throw Down or Portrait Artist Of The year (instead of the latest serial killer documentary). I’m digging in my own dirt, yes, but I also turn on the tunes and dance it out until I’m a glowing, sweaty bundle of endorphins, and then? I sluice off in a hot shower.

It’s such a relief because I got stuck there for a good long while with nothing but the heavier fare. Too much true crime (what is up with my fascination with serial killers, y’all). All the sad songs. My regrettable past playing on loop in my head. All The Trauma Work, none of the fun, and what passed for fun was really just anesthetic.

There wasn’t much room in my life for the things that give me life.

IX. I wrote a bit about that for this week’s Journal52, which I sent out to my beloveds via my newsletter + uploaded to The Wilderhood, but I thought I’d share it here as well. 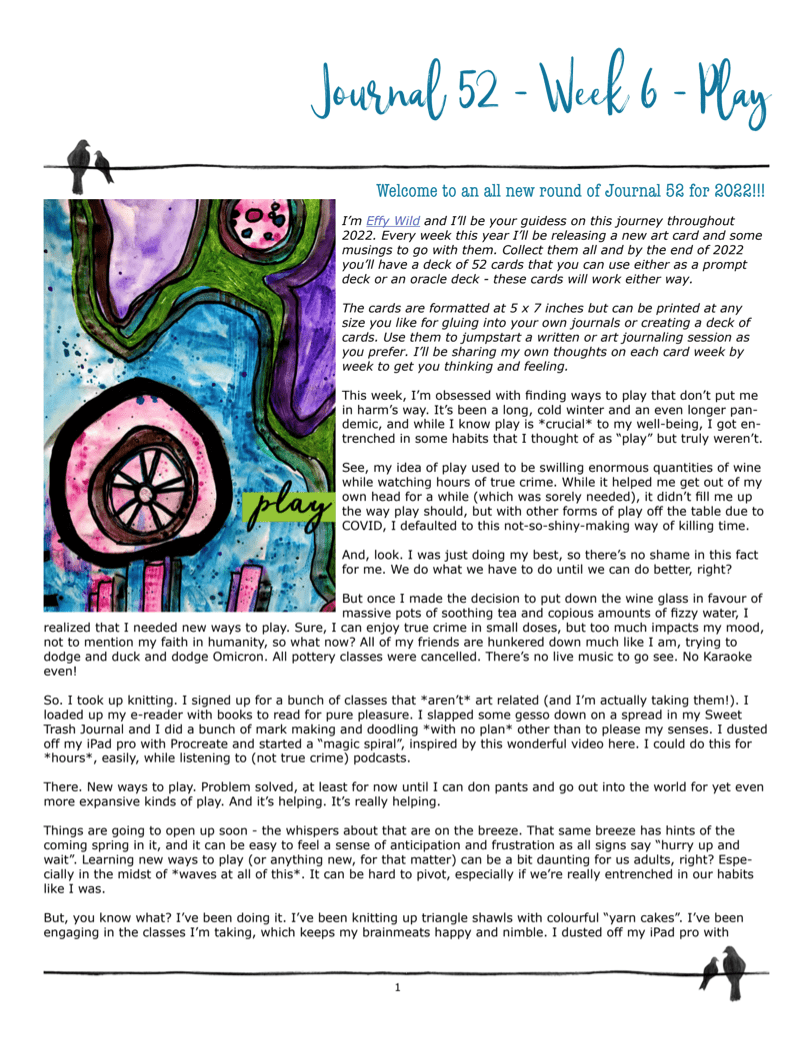 GRAB THE FILE ON DROPBOX

It has been an absolute joy to see how people respond to these (brand new for 2022) editions of Journal52.

X. As mentioned in my newsletter, I am 73 days alcohol-free. The search for lighter fare has been integral to this journey, because once you stop numbing everything out, everything arises to be felt and dealt with, and that, my loves, is heavy stuff. But, I’m up to it.

See? This is me. Clear-eyed. Self-possessed. Dancing in all of my own rooms without fear. Pushing as needed, shit be damned. This baby is worth it. 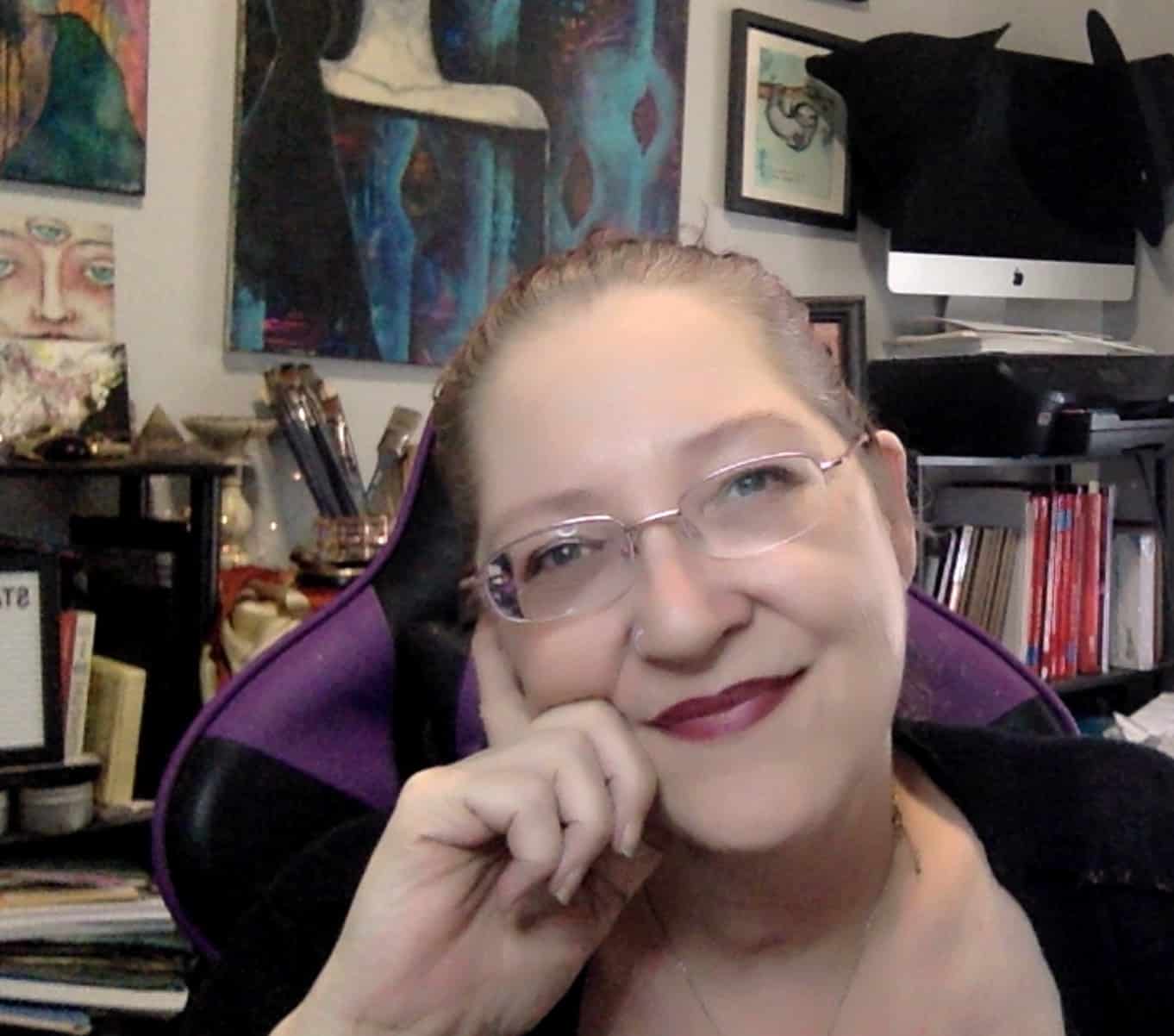 *I know I’m aging myself here – we give birth in beds now, but I had the delightful experience of having to hop up on a *table* in the delivery room once, and I’ll never forget it. Boy am I ever glad that’s a thing that’s changed.