Hello, Interwebs. It’s been a while, yes? I am not here to apologize for that, though. 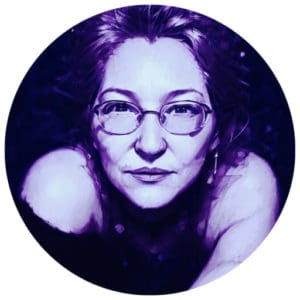 I’m here to declare that I am surfacing. Let me explain.

If you’ve followed me on the socials or taken classes with me for any length of time, you’re aware that the last few years have not been kind to me. I’m not going to go into detail here because I’ve already written more than enough about that but the very abridged, listicle form of this looks something like:

There were good things, too. They can be abridged like so:

And in and amongst all of that, I managed, somehow, to keep all my commitments to the collaboratives I contracted to teach in AND was on time 98% with the programs I run for my network of Wilderlovelies.

In other words, I’m still here.

I called this post “surfacing” because it perfectly expresses how it feels to be me right now at this point in my life. I haven’t quite broken the surface yet, but I can see that gorgeous, wavering circle of light above me. I am still tired, still suffering with what I think might be long COVID (heart palpitations, fatigue, brain fog, weird brain zaps), still forever trying to claw my house back out of the chaos that it became while I was in the throes of depression. I’m still unsure where I’m going. I’m still anxious a lot of the time. I’m still afraid a lot of the time.

But I don’t wake up crying anymore. I don’t have to fight the ideation demon, if you know what I mean. I don’t lose it over spilled coffee or forgetting the laundry ’till it mildews (an all too frequent occurrence) or a typo or broken link in one of my offerings. I don’t feel like I’m going to vibrate myself right out of my skin every second of every day. I want to live.

I want to live. And that’s progress. So I’ll take it.

I’m telling you this for a few reasons.

The first is that I want you to know that the person you see on the socials is fighting battles they may share parts of, but you really *cannot know* what is truly going on behind the screen.

The second is that, once again, your presence has kept me anchored to the planet in ways I can’t even begin to express.

*shituationships are my word for engagements with other humans that feel like relationships but turn out to be transactional or toxic in some way. I don’t deny my part in these engagements and trust me when I tell you that I work on forgiving myself for how I failed myself and others *every single day* but I have come to recognize that the fawn trauma response that has been my default for most of my life thanks to extreme child sexual, physical, and emotional abuse led to relationships in which I was easy to bully, abuse, use, disregard, and discard. You are welcome to adopt it if the word serves you.